The cell phone has dramatically changed how we communicate, and it’s connected us more than ever before.

While cell phones are now must-have devices, they weren’t always as accessible. When early models were released, their high cost made them more of a status symbol than an everyday tool.

How did we get to this point? This cell phone timeline takes you on a tour of the modern cell phone, from that first call on a New York City sidewalk in 1973 to the feature-packed smartphones of today and tomorrow. 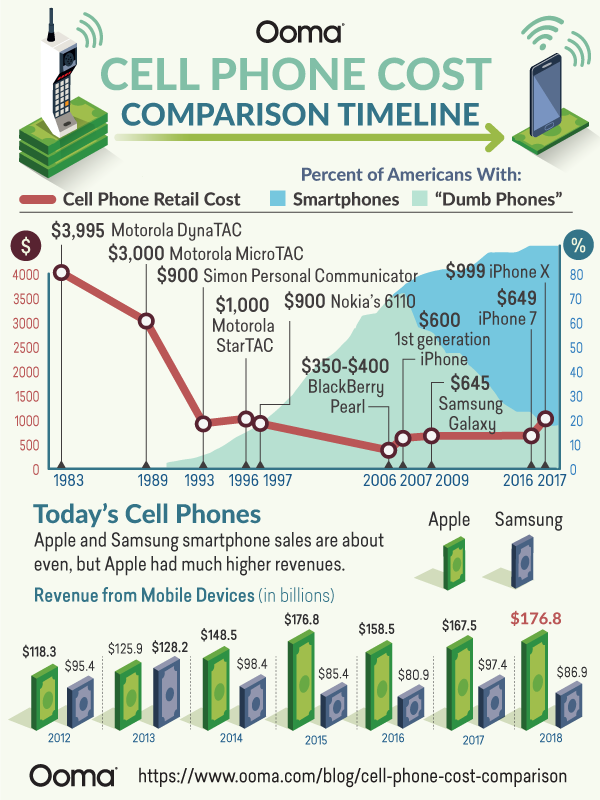 In the graphic above, we see that the cost of cell phones dropped rapidly in the eighties. Then, there was a period of low-cost during the nineties and early 2000s with early camera phones. The release of the first iPhone in 2007 changed everything, and in recent years, the cost of smartphones has risen as the hardware continues to get more powerful.

Early Prototypes: Ten years before the first portable cell phone was sold commercially, Motorola was on the cutting edge of cellular technology. The company’s R&D team spent the ’60s and ’70s researching how to turn military-style radio phones into consumer devices. It eventually succeeded, and in 1973, it completed the first successful demonstration of a handheld mobile phone. The phone was huge; it measured 11 inches tall and weighed about 2.5 pounds.

Motorola DynaTAC ($3,995): After the first mobile cell phone demonstration, it took about a decade of further development before it was available to consumers. The Motorola DynaTAC 8000X hit the market in 1983 with a hefty price tag of $3,995. By today’s standards, the DynaTAC was woefully basic; its peak capacity was 30 minutes of talk time, and the battery lasted only six hours.

Motorola MicroTAC ($3,000): Motorola engineers got to work reducing the cell phone’s size and its battery limitations. In 1989, they released the Motorola MicroTAC. The phone size shrunk to 9 inches long, the weight dropped to 13 ounces, and the battery could now accommodate 90 minutes of talk time. Along with the product’s advancements, the price dropped to $3,000.

Reducing Cost Through Service Contracts: The cost of a cell phone was one of the industry’s biggest problems, as it prevented many people from adopting this new technology. In an effort to reduce upfront costs and get the public to embrace the technology, phone carriers began offering reduced prices for consumers who signed up for cell phone plans. In return for signing a two-year contract, the carrier would “subsidize” or pay for part of the phone’s cost.

Simon Personal Communicator ($900): In 1993, an early precursor to the modern smartphone debuted. BellSouth and IBM collaborated on the Simon Personal Communicator, a PDA-like device that was the first to have a touchscreen interface. It could send and receive email, which was groundbreaking. It had autocorrect, fax capability, a calendar and to-do lists, plus a sketch pad that could be used with the included stylus. However, IBM’s Simon was ahead of its time, and fewer than 50,000 devices were sold.

Motorola StarTAC ($1,000): Consumers wanted small and portable mobile phones, so in 1996, Motorola released the StarTAC with a price tag of $1,000. It was 3.1 ounces and not much bigger than the size of a man’s wallet. It also further pushed the flip-phone design by having the entire device fold in half like a clamshell. Also, the StarTAC was one of the first devices to accommodate text messages, or SMS. It used a lithium-ion battery, which shrunk battery size while accommodating a longer talk time. The StarTAC was a precursor to the 2004 Motorola RAZR flip phone, which eventually sold 130 million units.

Nokia’s 6110 ($900): Released in 1997, the Nokia cost $900 upfront, but its price was $200 when purchased with a cell service contract. This lower price point made the phone one of the best-selling in the 1990s. It focused on the business traveler by offering capabilities for overseas networks and adding business-centric functions such as currency conversion, a calculator, a clock, and a calendar.

The 2000s: Smartphones Are Developed

Handspring Treo ($700): There was a rush to add more functionality to cell phones. In 2001, Handspring released the Treo, a combination of a cell phone and personal digital assistant (PDA). This merger of technologies foreshadowed the devices to come by demonstrating that a cell phone could be the single, primary device for managing all aspects of your life. It had a shelf price of $700, which put it within reach of many consumers.

BlackBerry Pearl ($350-$400): Early BlackBerrys, such as the BlackBerry 5810 of 2002, were clunky and more pager-like. However, the 2006 release of the BlackBerry Pearl was a hit, and it became one of the best selling BlackBerrys ever. The 1.3-megapixel camera on the Pearl was one of the industry’s best at that time, and a new navigation trackball became a staple of nearly every subsequent BlackBerry. Its price was about $350 retail or $199 with a contract. In 2006, BlackBerry was a major player in the market with five million active subscribers. It was even dubbed “CrackBerry” because of the addictive nature of the phone.

1st Generation iPhone ($600): The Apple iPhone debuted in 2007, and its features were both a source of praise and criticism. Gone were trackballs and qwerty keyboards, replaced by touchscreens. Taking center stage were features such as a 2-megapixel camera, full web browsing, and iTunes integration. At a price of $600, it was more expensive than other cell phones on the market, but that didn’t matter; months after its release, it was still difficult to find.

Some reviews were positive: “Words cannot describe how incredibly wonderful this thing feels to touch and hold. It is an absolute marvel of engineering. Gorgeous in every way,” said an Engadget write-up.

Other reviews were negative: “There’s no denying the wow factor, but overall the iPhone isn’t worth the money. For $300 I’d give it the thumbs up, but at $600, you’re better off with something else for half the price,” said Wired.

Samsung Galaxy ($645): Released in 2009 with a price tag of $645, the first generation Samsung Galaxy had a 1 GHz processor, 512 MB of RAM, a 4-inch display, and a 5-megapixel camera. Its functionality was on par with, if not slightly better than, the iPhone 4, and it was available on nearly every major carrier, whereas the iPhone was only available through AT&T and Verizon at that time. The widespread availability allowed Samsung to sell more than 24 million handsets globally.

The 2010s and the Future: The Smartphone Evolves

Smartphones Become Popular: In 2013, smartphones overtook “dumb” phones in worldwide sales. Today, about 77 percent of Americans have smartphones and 18 percent have basic cell phones. These figures, gathered by Pew Research Center, have remained constant since November 2016, indicating that the market may have plateaued at maximum saturation, at least temporarily.

Apple vs. Samsung: Apple and Samsung have dominated global smartphone sales for the past decade. As of 2017, both companies were neck-and-neck based on the number of phones being sold. However, Apple was making about $70 billion more per year from the sale of its mobile devices. By 2018, Apple’s revenue from mobile device sales was double that of Samsung. Consumer economics do factor into this difference, but so does product supply. In 2016, Samsung was flooding the market with a shocking 31 new devices, compared to Apple’s three new phones in the same year.

Increasing Connectivity: Today’s smartphones are powerful computing devices, but in many ways, they remain true to their beginnings as a device that helps us connect. For example, we have the ability to call Mom from just about anywhere, which no doubt makes her happy.

What’s changed is that now we’re able to connect in so many different ways. Smartphones keep us connected to other phone lines via a free calling app or an office phone app. Of course, social media offers tremendous connectivity. People are managing small businesses right from their phones. Plus, today’s smart devices make it possible to use your phone to remotely watch a live video feed from your home security cam. Now, with the rollout of 5G already starting, we’re poised to be even more connected.

Learn how Ooma VoIP can help you stay connected to the people and places that matter most.
Learn about how you can make free calls using VoIP.

Give your grandparents a gift they won’t want to return
National Emma M. Nutt Day: an important day in communication history
Struggling with a cell phone before bedtime?
We use cookies and similar technologies to analyze traffic, enhance your experience and allow our partners to serve tailored advertisements. For more information or to opt out, visit our Privacy Policy.
I agree  Learn more