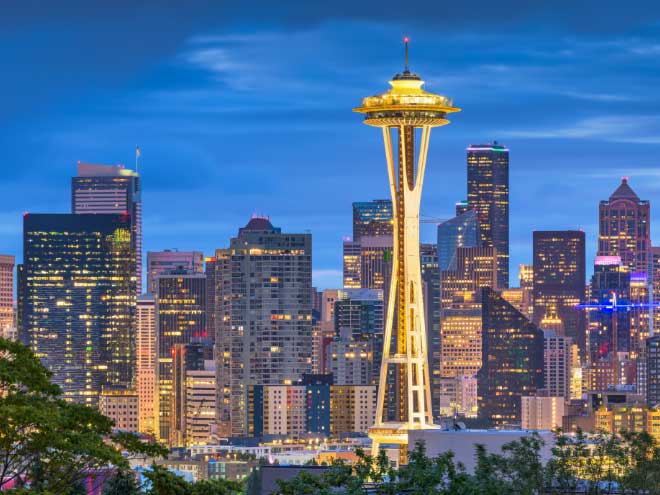 Get a Seattle number with Ooma.

Make sure your business connects with your community
with a 206 area number.

Having a local Seattle phone number is important for any business to be found in their local community, and people often look to support local businesses that are making their communities more prosperous.

Ooma takes pride in being able to help small businesses in Seattle sound and act like big businesses with powerful features such as desktop and mobile apps that allow its users to work from anywhere in the world.

The area code 206 is just as iconic as the city itself. The area code 206 serves King County, Kitsap County and the cities of Seattle, Shoreline, Burien, SeaTac, Mercer Island and more. It covers the entirety of Seattle and its nearby suburbs. Like the code of many major cities in the United States, 206 is one of the original 86 codes created by AT&T and the Bell System in 1947. While it originally covered the entire state of Washington, 206 was split in 1995 and again in 1997 as the population of Seattle grew. Ooma customers can choose a phone number that starts with the iconic area code to help give their business a more local feel.

Like most of the residents of The Emerald City, we at Ooma are big fans of the coffee culture this city is known for. While it is common to see Starbucks in many neighborhoods in Seattle, many other small businesses bring both competition and diversity to the coffee scene. Ooma provides many of these small businesses in the city of Seattle with the ability to serve their community better with a local phone number.

Having a reserve of coffee nut heads is not the only thing that the emerald city has going for it. The coffee scene is appeased by the hiking, kayaking, and general outdoors lifestyle of its residents. The Emerald City is home to a grunge music scene, the Seahawks, and home to the headquarters of many companies in the tech industry, including Amazon and Microsoft.

Seattle is also known for being one of the most famous settings for American TV shows and movies, including Grey’s Anatomy, Frasier and Sleepless in Seattle.

Also, it is hard to go wrong with visiting one of the longest-running farmer’s markets in the United States – The famous Pike Markets (Rings no bell? At least we tried). As a tourist, the Pike Place Market is one of the best places to be on a weekday morning. Ooma caters to the needs of small businesses that make up the palpable fresh food culture of Seattle by providing these businesses with affordable phone services they can take on the go with the Ooma Mobile app.

Ooma office is easy to set up and easy to use, all you need as a business owner is an Ooma account and a compatible device.

Are all Seattle area codes available?

Can I transfer my Seattle number?

Can I have a Seattle phone number or toll-free number?

Do I own my Seattle phone number?

While Seattle phone numbers are registered and assigned by Ooma, the number is yours to use. As long as your account is in good standing, which means you don’t have any outstanding balances, you are free to transfer it to another phone provider if you choose.