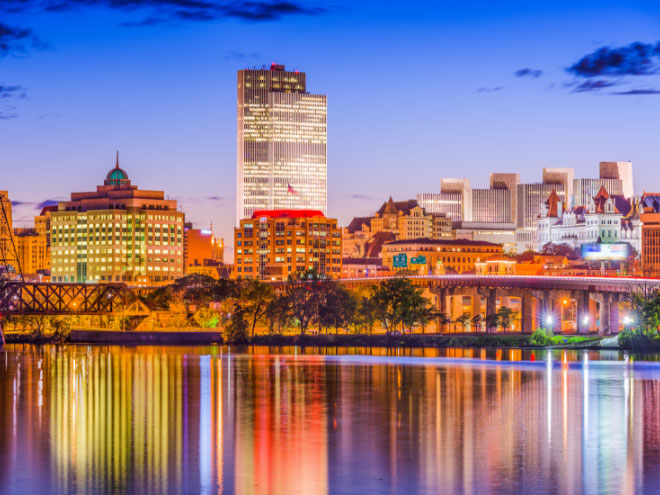 Get an Albany number with Ooma.

Make sure your business connects with your community
with a 518 or 838 area number.

Having a local Albany phone number is important for any business to be found in their local community, and people often look to support local businesses that are making their communities more prosperous.

Albany phone numbers with the local 838 or 518 area code.

The city of Albany is famous for many things. First, Albany is the capital of the state of New York; therefore, it is known for being the home to New York politics. Albany is also the seat of Albany County. While politics remains a prevailing part of Albany, the city has seen some moderate industrial development in the form of paper manufacture, machine tools production, chemicals, and dental products manufacture, and the production of electronics too.

However, the residents of Albany know how to do more than just politics. The city is also known for hosting incredible arts and entertainment events, especially at the venue known as “The Egg.”

Locations like the Palace Theatre and The Egg serve as mid-sized forums for activities like music, theater, and spoken word performances. The TU Center, on the other hand, serves as the city’s largest musical venue for both national and international bands with worldwide prominence.

Ooma helps small businesses connect with many of the busy neighborhoods like Washington Park, Downtown, West Hill, and Pine Hills with local phone numbers that give residents and tourists a more local feel.

Ooma helps to propel the entertainment culture of Albany by providing small businesses around major event centers with seamless nationwide calls. Features such as call recording, call blocking, and virtual receptionist (which can be used so that customers aren't left ringing all day).

Albany is a city that is filled with iconic landmarks such as the New York State Capitol, Schuyler Mansion, Erastus Corning II Tower, Times Union Center, and more. These landmarks have served as centers of tourist attraction for years. Ooma helps residents of Albany connect with tourists at affordable rates with our various phone plans and internet phones.

Do you want a reliable phone service that helps your small business serve the residents of Albany better? Ooma has got you covered.

Are all Albany area codes available?

Can I transfer my Albany number?

Can I have a Albany phone number or toll-free number?

Do I own my Albany phone number?

While Albany phone numbers are registered and assigned by Ooma, the number is yours to use. As long as your account is in good standing, which means you don’t have any outstanding balances, you are free to transfer it to another phone provider if you choose.