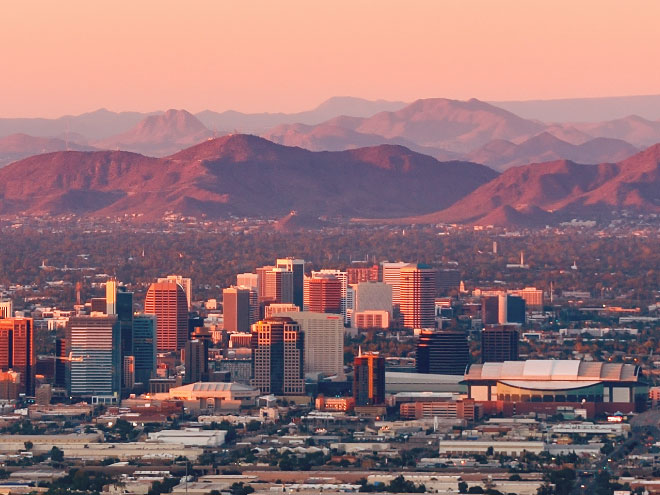 Get a Phoenix number with Ooma.

Make sure your business connects with your community
with a 480 area number.

Having a local Phoenix phone number is important for any business to be found in their local community, and people often look to support local businesses that are making their communities more prosperous.

Everyone has heard of the city of Phoenix at one point or another. Phoenix is the capital of Arizona and the most populous city in Arizona with over 1.7 million people (at the 2019 census). Arizona is also the fifth most populous city in the United States. However, Ooma did not just choose to serve Arizona because of its population. We decided to add our touch of amazing and affordable internet phone service to all the incredible features the city already offers.

So, why exactly is Phoenix such a famous city? Well, for starters, not that many cities in the United States can claim to have a weather as reliably sunny as Phoenix. The valley in which Phoenix is located is called The Valley of the Sun. This is what makes Phoenix a city that can boast of up to 299 days of sunny weather in a year. Of course, this also means that it gets less rainfall than the national average in a year.

With winter temperatures reaching near freezing points at night and as high as 66 degrees during the day, it is no wonder Phoenix is a popular retirement and vacation spot.

It is hard to contest the natural beauty that the city of Phoenix exudes. The city is a sight to behold, with landscapes surrounding the entire city and striking mountains with natural rock formations lacing every inch of those mountains. Every heard of Camelback Mountain? Yeah, it’s named that way because it looks like a camelback, and it is one of the very mountains found in Phoenix, making the natural beauty of the Phoenix desert breathtaking.

Ooma understands that a city like Phoenix, known worldwide for its beauty and great weather, would need a way to provide a local feel to visitors with great phone service. Ooma helps small businesses provide a more local feel with local area code 480.

Ooma is an affordable and reliable internet phone service company that offers smalls businesses and residents in Phoenix more time to enjoy the city's breathtaking beauty by offering features like call recording, call blocking, and a virtual receptionist.

Ooma serves every neighborhood in Phoenix, including the popular ones like Arcadia, Central Phoenix, Chandler, Downtown Phoenix, Glendale, Roosevelt Row, and more.

Are all Phoenix area codes available?

Can I transfer my Phoenix number?

Can I have a Phoenix phone number or toll-free number?

Do I own my Phoenix phone number?

While Phoenix phone numbers are registered and assigned by Ooma, the number is yours to use. As long as your account is in good standing, which means you don’t have any outstanding balances, you are free to transfer it to another phone provider if you choose.