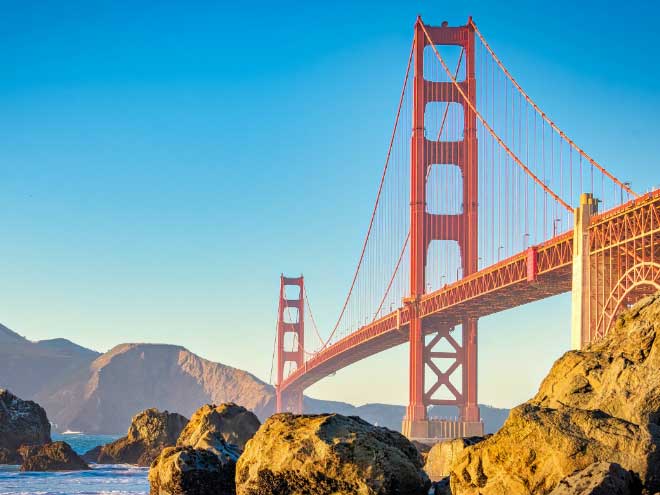 Get a San Francisco number with Ooma.

Make sure your business connects with your community
with a 415 or 628 area number.

Having a local San Francisco phone number is important for any business to be found in their local community, and people often look to support local businesses that are making their communities more prosperous.

Get local 415 and 628area codes with a San Francisco phone number.

According to the U.S. Census, it is estimated that San Francisco has more wealthy people living in it than any other of the highly populous United States metropolitan areas. The fast-growing tech industry and its closeness to Silicon Valley are responsible for the high cost of living in San Francisco.

A major component of this start-up haven is its area code. San Francisco's area code 415 is one of the original 86 codes created in 1947 by AT&T and the Bell System. The area code 415 at this point is more than just a historic area code—it is an identifier for anyone associated with this high-tech city.

San Francisco has a single overlay, the area code 628, that serves the same area, which includes San Francisco County, Marin County and the cities of San Francisco, San Rafael, Novato, Daly City, Mill Valley and more. By getting a local number starting with 415 or 628, your business immediately communicates its association with a high-tech city.

San Francisco is called start-up haven for a reason. Thousands of startups are started in this city of technology every year, and one thing a startup needs to survive is effective and affordable communication. Ooma can offer this to startups with its wide range of services tailored towards small businesses.

In a city of big dreams and massive opportunities for startups and small businesses alike, it comes as no surprise that San Francisco is one of the most expensive cities to live in worldwide. Having an affordable phone service like Ooma is a great win for everyone.

San Francisco is famous for more than just being the hub and home for many tech-employees and billionaires. San Francisco is also known for the variety of diverse restaurants and food trends that can only be found in this incredible city.

Many of San Francisco’s visitors want to have that local feel of this tech-infused and trendy, food-driven city. One way business owners, such as restaurant owners, hotel owners, and more, can give their customers a more local feel is with a local phone number.

San Francisco is amazing as a standalone city, but its appeal increases when you consider its proximity to other big cities like Oakland and San Jose and commercial areas like the Peninsula and East Bay. With San Francisco being quite small geographically and the Bay Area being amazingly large, small businesses have the opportunity to expand their businesses and still stay local with Ooma.

As a business owner, you can get more local with Ooma. With Ooma’s internet phone service, you can serve the city of San Francisco better with a local phone number. The process is simple. It takes less than 15 minutes to go from getting an account with Ooma to setting a local phone number for your business.

Can I transfer my San Francisco number?

Can I have a San Francisco phone number or toll-free number?

Do I own my San Francisco phone number?

While San Francisco phone numbers are registered and assigned by Ooma, the number is yours to use. As long as your account is in good standing, which means you don’t have any outstanding balances, you are free to transfer it to another phone provider if you choose.