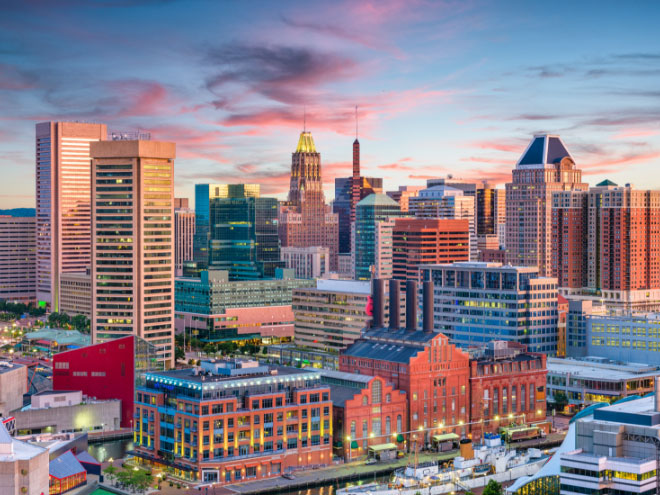 Get a Baltimore number with Ooma.

Make sure your business connects with your community
with a 443, 667 or 410 area number.

Having a local Baltimore phone number is important for any business to be found in their local community, and people often look to support local businesses that are making their communities more prosperous.

While all this talk about population is interesting, there are several other things that make the city of Baltimore an amazing place to be. Baltimore is nicknamed Charm City due to all the beautiful attractions it has to offer its visitors and residents. The populous nature of the city and the ever-progressive residents of the city make Baltimore an attractive market for small businesses and big businesses alike.

One of Baltimore's many attractions is the picturesque Inner Harbor, which has led to the creation of several clones worldwide. Some of the latest trends in the city of Baltimore include the new trendy restaurants, amazing new boutique hotels, incredible festivals, and the Federal Hill Park, which is 10 acres large and just a short distance from the Inner Harbor. The Federal Hill Park is a major tourist attraction because it offers a wide-angle view of the waterfront and essentially lets anyone take in the city's captivating beauty.

Are all Baltimore area codes available?

Can I transfer my Baltimore number?

Can I have a Baltimore phone number or toll-free number?

Do I own my Baltimore phone number?

While Baltimore phone numbers are registered and assigned by Ooma, the number is yours to use. As long as your account is in good standing, which means you don’t have any outstanding balances, you are free to transfer it to another phone provider if you choose.