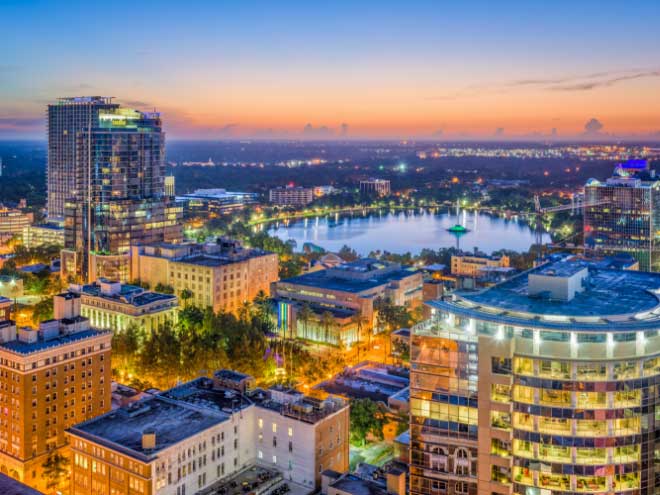 Get an Orlando number with Ooma.

Make sure your business connects with your community
with a 321 or 407 area number.

Having a local Orlando phone number is important for any business to be found in their local community, and people often look to support local businesses that are making their communities more prosperous.

Get more local with Ooma.
Serve Orlando better with a local phone number.

Orlando is known by many nicknames, but two of the prominent ones are “The City Beautiful” and “Theme Park Capital of the World.” Orlando is the fourth largest city in the state of Florida, and it is also the state’s largest inland city.

Orlando was nicknamed “The Theme Park Capital of the World” due to the number of tourist attractions that the city possesses in the form of theme parks and beautiful buildings. In the year 2014 alone, the city of Orlando attracted a whopping 62 million tourists. The Orlando International Airport is the thirteenth busiest airport in the United States and the 29th busiest airport in the world. That is a lot of traffic for just one city.

Orlando is, therefore, one of the most visited tourist destinations in the world, making its tourism industry is a major aspect of its economy, and thanks to its famous attractions such as Walt Disney World, Universal Orlando Resort, among many others. Orlando is ranked as the fourth-most popular American city based on where people want to live.

Orlando isn’t just a tourist site; it is also one of the busiest American cities for conventions and conferences. Thanks to the location of the Orange County Convention Center, which is the second-largest convention facility in the United States, Orlando is a popular destination for convention-goers. Many resort hotels in the area, including the ones from Disney and Universal, also have convention centers. There is no shortage of convention centers for visitors in Orlando.

The incredible number of conventions hosted in Orlando makes it a very inviting location for several businesses, which means your local business can represent Orlando better with a diversified business tourist plan and a local phone number- something that Ooma provides at an affordable rate.

Orlando was already listed as a “Gamma” level city in the World Cities Study Group’s inventory. Ooma would love to provide its residents and small businesses with features that would enable them to serve the city even better.

Are you ready to use the best internet phone service in Orlando? Try Ooma today!

Are all Orlando area codes available?

Can I transfer my Orlando number?

Can I have a Orlando phone number or toll-free number?

Do I own my Orlando phone number?

While Orlando phone numbers are registered and assigned by Ooma, the number is yours to use. As long as your account is in good standing, which means you don’t have any outstanding balances, you are free to transfer it to another phone provider if you choose.